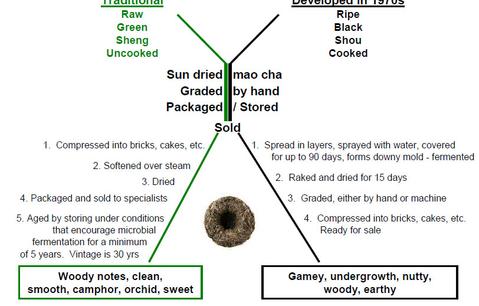 “Tea produced from leaves harvested from the large-leafed Da Ye tea bushes growing in the Yunnan province, sun-dried and having undergone a process of fermentation, either natural or induced”  (Chinese Government Designation in 2008)

To the Chinese, pu-erh is considered a dark or black tea and they refer to our black tea as 'red tea'.  Dating from the Tang Dynasty (618–907 AD), the most famous of pu-erhs originated in the town of Pu-erh in Yunnan Province, which was a major trading center for commodities.  Tea for trade was carried on the ancient Tea and Silk Roads from Pu-erh to countries such as Thailand, Hong Kong, Burma, Laos, Tibet and Vietnam. It didn't take long for the Chinese to realize that it was easier to transport the tea if it was compressed.  Also, because of the length of the journey which could take months if not years, they realized that the tea actually tasted better by the end of the journey.  Microbes acted on the tea during travel and the teas became richer, fruitier and smoother.

Pu-erh is made from large leaves found on 3 types of tea plants in Yunnan:

The chart shows how the two methods of producing pu-erh varies.  Theprocess begins the same for both, but after drying and grading, the leaves are sold and go through a slightly different process.  Both methods use fermentation though. 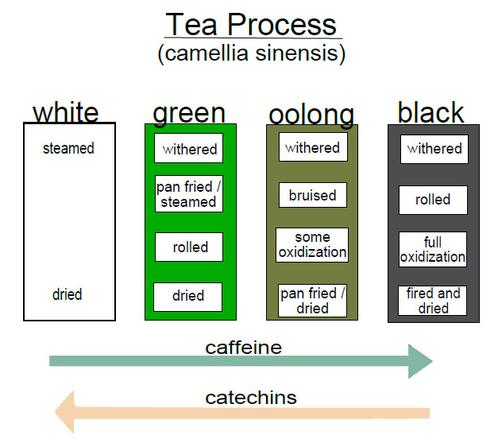 All tea comes from one plant:  camellia sinensis, of which there are two varieties:  camellia sinensis sinensis and camellia sinensis assamica.  The types of teas that we see today are determined by factors such as soil conditions, climate, altitude and the manufacturing process.  The role of the tea master plays a large part in determining the quality of the tea.  It is his job to determine when each part of the process is complete.

Below is a description of some of the processes used:

Plucking: Tea leaves and flushes, which include a terminal bud and two young leaves, are picked from Camellia sinensis bushes typically twice a year during early spring and early summer or late spring.

Withering/ Wilting: The tea leaves will begin to wilt soon after picking, with a gradual onset of enzymatic oxidation. Withering is used to remove excess water from the leaves and allows a very slight amount of oxidation. The leaves can be either put under the sun or left in a cool breezy room to pull moisture out from the leaves.

Maceration: Known in the Western tea industry as "disruption" or "leaf maceration", the teas are bruised or torn in order to promote and quicken oxidation.  The leaves may be lightly bruised on their edges by shaking and tossing in a bamboo tray  or tumbling in baskets.

CTC: cut, tear, and curl method where leaves are chopped into tiny pieces, then rolled into tight balls by machines instead of being rolled by hand.  This was originally intended for low grade teas and highly suited for teabags.  Large tea producers in all major Sri Lanka now use this method and 80% of India’s tea producers use this method

Oxidation / Fermentation: For teas that require oxidation, the leaves are left on their own in a climate-controlled room where they turn progressively darker. This is accompanied by agitation in some cases which releases tannins. (There is a misuse of the term fermentation; in reality only pu-erh uses the fermentation process; where compressed tea is sprayed with water and covered up.  Aging, heat and humidity will encourage micro-organisms and bacteria to develop a woody, less astringent tea).

Fixation: Moderately heating the leaves to stop the oxidation at a desired level.

Sweltering / Yellowing: Unique to yellow tea, warm and damp tea leaves are allowed to be lightly heated in a closed container, which causes the previously green leaves to turn yellow due to chlorophyll transformation.

Rolling / Shaping: The damp tea leaves are then rolled to be formed into wrinkled strips, by hand or using a rolling machine which causes the tea to wrap around itself. This rolling action also causes some of the sap, essential oils, and juices inside the leaves to ooze out, which further enhances the taste of the tea.

Drying:  Typical ways of ‘finishing’ the tea so its ready for market includes panning, sunning, air drying, or baking (baking is the most common method).

Aging / Curing: Some teas require additional aging, secondary fermentation, or baking to reach their drinking potential. For instance, a green tea pu-erh, prior to curing into a post-fermented tea, is often bitter and harsh in taste, but becomes sweet and mellow through fermentation by age or dampness.  More about pu-erh below.  Flavored teas are manufactured in this stage by spraying the tea with aromas and flavors or by storing them with their flavorings such as jasmine or rose petals.

The Manufacturing Process of Tea