Note: caffeine in tea is dependent on many conditions such as type of cultivar, soil conditions, temperature, etc.  Studies show that the levels can change from plantation to plantation, from tea to tea.  Research has shown that some black teas actually have less caffeine than some green teas.  Some studies are not rigorously controlled or they have examined certain teas with a specific water temperature and steep time, but not at any other temperature or steep time.  One study examined caffeine in a black tea after a seven minute steep but not at the usual five minute steep.

Suffice it to say, tea has less caffeine than coffee.  If you want to reduce caffeine intake, just make weaker cups of tea and discard the first rinse, which may or may not lower the caffeine level.

**I have reservations about the stated amount of caffeine in white tea, which is the top bud and leaves.  It should at least have the same amount as some greens, even taking into account the volume of leaf, since most caffeine is at the top of the bush to repel insects. 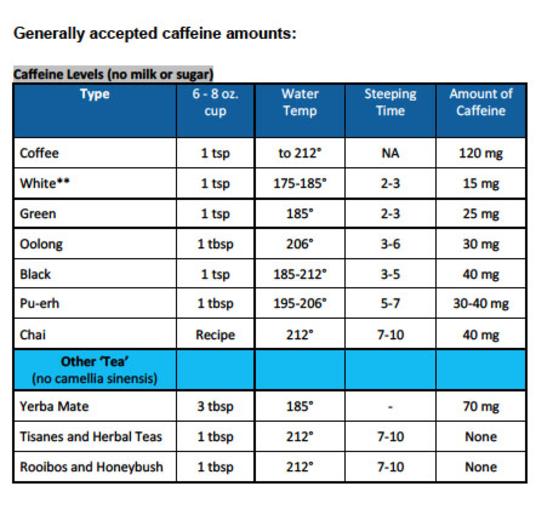 Coffee is an excitant and caffeine reaches the brain in less than 5 minutes, 2-5 hours later the effect has gone.
Tea is a stimulant and caffeine is released gradually over 10 hours.

The Chemistry of Tea

Carbohydrates, which add to the sweetness of tea, help to fuel the enzymatic reactions that take place during oxidation and are also responsible for the creation of polyphenols in young tea leaves.

The term polyphenol refers to a categorization of compounds composed of many phenolic groups – up to 30,000.  These compounds are plant metabolites produced as a defense against insects and other animals; such as the alkaloid caffeine and two similar compounds: theobromine and theophylline, which add to the bitterness of tea.  Alkaloid levels depend on the varietal and cultivar of camellia sinensis used, along with climate, geology, geography, age of the leaves and the propagation method used. The bud and first leaf have the highest concentration of polyphenols, 2-3 times more caffeine, and polyphenol levels decrease in each leaf moving down the plant.

The amino acid L-theanine found in tea has been shown to reduce cognitive stress and used in conjunction with caffeine, show a possible improvement in memory and learning tasks.

The volatile substances in tea leaves are largely responsible for a tea’s flavor and aroma, and many are derived from the actual manufacturing process itself, e.g.: